LANDIKOTAL: Additional Chief Secretary FATA Sikandar Qayum Khan has applauded the hard work and relentless efforts of polio Emergency Operations Center FATA and agency level teams in keeping FATA polio free for the last 21 months. He said “good job done by EOC FATA Team have been acknowledged not only by local but also national leadership but we need to sustain these efforts for polio eradication form FATA and the country”. He assured that “support for polio eradication efforts will not only be sustained but rather enhanced and polio will be kept as government’s one top priority”.

Additional Chief Secretary (ACS) FATA Sikandar Qayum Khan said this while chairing polio programme review meeting at FATA Secretariat held, today (May 31, 2018). ACS FATA appreciated EOC FATA Team, UN partners, Agency Surgeons and Political Administration for their exemplary team work in reaching out and vaccinating children in far flung areas of FATA.
Earlier, Coordinator EOC FATA Mahmood Aslam Wazir presented facts and figures regarding progress made by polio program in FATA. He shared that “for the past 21 months not a single polio case has been reported from FATA while all the monitoring benchmarks have been met during anti polio campaigns”.
He informed that only around 0.08 % of the target children are missed inside FATA while the rest are covered.
He added that even out of the agencies/FRs children are tracked via telephone to confirm whether children are administered with anti-polio vaccine or not and their name lists are shared with relevant provincial EOC where children have gone, for tracking and vaccination.
During the meeting, various aspects of the polio program and challenges were discussed. ACS FATA assured EOC FATA Team of his support for smooth implementation of pre and post campaign activities, especially monitoring in far flung and hard to reach areas.
The chair highlighted the need for extending the same accountability framework to EPI for bringing it at par with PEI which was agreed and referred to Assistant Director EPI-PEI FATA to ensure accountability.
Assistant Director EPI-PEI FATA Dr. Iftikhar Ali, UNICEF Chief of Field Office Peshawar Charles Nzuki, Technical Focal Person FATA Dr. Nadeem Jan, National Coordinator WHO Dr. Sarfaraz Afridi, Team Lead WHO Dr. Hamid Mohmand, Team Lead UNICEF Tufail Ahmed, UNICEF Health Officer Dr. Abdul Qayum Khan and other relevant officials attended the meeting. 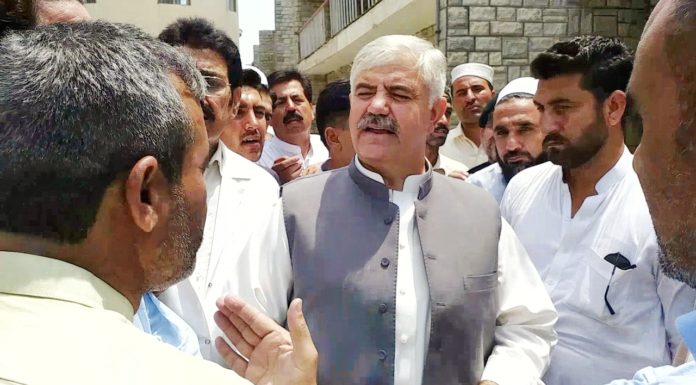