PESHAWAR: At the invitation of Emarat-e-Islami Afghanistan, the Pakistani top level of religious scholars arrived in Kabul to hold peace talks between Pakistan security officials and Tehreek-e-Taliban Pakistan (TTP).

According to sources, the Pakistani Ulema delegation would meet with the leadership of Emirat-e-Islami Afghanistan and TTP leaders during their stay in Kabul. The delegation departed for Afghanistan from Islamabad on Monday. 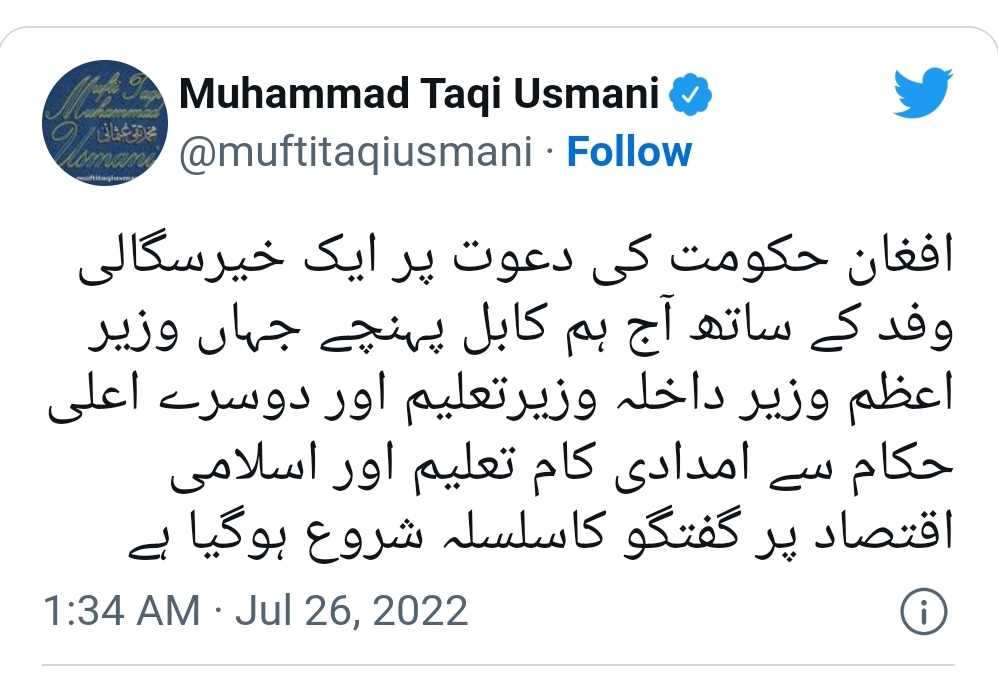 Talking to Mufti Taqi Usmani, after being informed that Mufti Sahib is going to Afghanistan for discussions with the Afghan leadership, the president said since Afghanistan did not possess nationwide internet connectivity, therefore, initially, the education materials of AIOU and VUP could be communicated to the Afghan students, both male and female, through its television network.

The offer was made when the Afghan minister of education had met the president and said that higher education was in dire straits in Afghanistan, the President Secretariat Press Wing said in a press release.

On various occasions, the president had communicated the Government of Pakistan’s offers of providing online and virtual educational facilities to Afghanistan during his meetings with the Afghan ambassador and counsel generals, and with other Afghan government leadership, directly or indirectly, through his interaction with them.

The president said the government and the state of Pakistan believed in providing equal educational opportunities for women, on a par with its male population. “Iqra in Quran is for all Muslims and is not gender specific,” he added. He further said that keeping in view the specific socio-political concerns of Afghanistan, women could be imparted education by making special arrangements as deemed appropriate and as was initially pledged by the current Afghan leadership. He said Islam emphasized imparting education to all without making any distinction between men and women.

He further observed if Afghanistan was taking measures to provide education to its female population according to its own preferences, the far-reaching initiative should also be properly publicized through all channels of media and communication tools to rest of the world to allay their concerns in that regard.

Pakistan wants peace and development in Afghanistan and it cannot happen without the development of their own human resource, he added.
Earlier, a delegation of tribal elders and government representatives visited Kabul and held talks with TTP. The TTP had placed a number of conditions to return to Pakistan and wanted to reverse the Fata merger. They also wanted to provide them guarantee from the government to provide the assurance that they would not be pursued in the courts.