LANDIKOTAL: Expressing solidarity and admitting the sacrifices of Pakistan army and state institutions for the sake of Pakistan and citizens, a large number of locals and civil society members took out a rally from historical ‘Bab-e-Khyber’ to Pak Afghan border Torkham on Sunday.

The participants of the rally launched their journey from Jamrud subdivision with national flags hoisted on their vehicles and gathered at Bacha Khan square of Landikotal bazar. 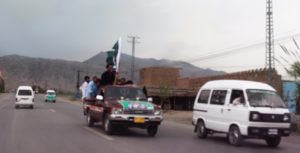 The speakers said that as the writ of government has been restored throughout Fata and peace was prevailed everywhere in the country then there was no need of any movement.

The elders demanded the government to provide job opportunities and alternate business to the tribesmen of Landikotal as the local people’s trade had already suffered.

The tribal elders vowed that they would not become the part of any conspiracy and anti-state group which work to destabilize Pakistan and the state institutions.

The rally reached and ended at Pak Afghan border Torkham.